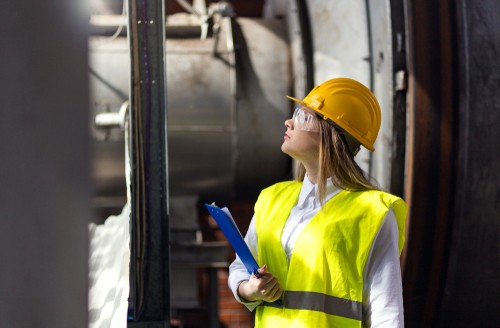 Amy Eberle is a Quality Manager at Royal Engineered Composites—a manufacturer of carbon and fiberglass structures for assembly of aircraft located in Minden, Nebraska, near Leadership Resources’ office in Lincoln, Nebraska—with a client list including Boeing, Bell Helicopter, and Northop Grumman. Amy holds an important role at the employee-owned company.

Starting as a front office secretary in 2001, Amy had no formal education and constantly battled feelings of inadequacy. As a single mom of three, Amy spent a lot of time judging herself. She said she didn’t feel worthy or capable of changing others’ perception, especially when she wasn’t happy about her own situation.

Despite her circumstances, Amy knew she was capable of more and wanted more. She had genuine interest in helping others, and realized she needed to make some changes. She felt a fierce obligation to herself, her children, and her employer to become her personal best.

Taking action, Amy went back to school and received her Associates degree in Quality Technology. Despite her accolades, Amy still struggled with a lack of self-confidence and questioned her abilities to be in a leadership position. However, the President of Royal Engineering, Dave Arnold, saw something different in Amy.

Dave chose Amy to run a brand-new department. While Amy now possessed the technical skills needed to take charge, she was faced with a new test—how to lead and manage a team of three.

As Dave recounts, Amy’s biggest challenge was setting clear goals and then building a cohesive team to achieve those goals. There was a lot of ‘new’ thrown at Amy, and Dave admits he did not provide Amy with a lot of direction. What he did provide however, was the opportunity for Amy to develop her leadership skills at Leadership Resources.

Amy enrolled in the Accelerate Leadership Program (ALP) which provides a development pathway and individualized coaching. She experienced tremendous growth. One of her earliest successes occurred during a situation of conflict. An employee came to Amy upset, frustrated, and ready to quit. Amy used this as an opportunity to put her development skills into practice, spending several hours with the employee—focusing on him, not the situation.

At that point, Amy recognized the Accelerate Leadership Program was coming to life. She realized the only way to be successful was in the success of others and that others were looking to her in their times of need. This was the turning point for Amy.

To overcome her feelings of inadequacy, Amy began tracking her negative behaviors—ultimately eliminating the self-defeating stories in her own head. As she progressed, Amy took the tracking tools she learned and began seeking out metrics that would help her measure development success for her team.

Amy’s biggest success came when she had the opportunity to step into the Quality Manager role. She now manages a team of 18 direct reports and is dedicated to the development and coaching of her employees. Amy is a catalyst for organizational change within her company, and her ideas and actions ripple throughout Royal Engineered Composites.

Today, Amy continues to grow as a powerful and patient leader. She’s excited about the level of confidence in her abilities—something she says she could have only dreamed about three years ago. The Accelerate Leadership Program has helped her feel a purpose, not only in her career, but in her personal life too.

Dave says he has seen a fundamental change that will be with Amy forever. Through the Accelerate Leadership Program, she was exposed to several different layers of leadership, in which she learned to identify areas of growth, seek out solutions, test them in application, and then modify them for real life. Amy has learned life skills that will continue to help her grow and meet new challenges.

“There are hundreds of leadership development programs,” says Amy, “but there is nothing so personal that impacts the whole person like the Accelerate Leadership Program does. Through its unique approach, it is guaranteed to create great, impactful leaders.”